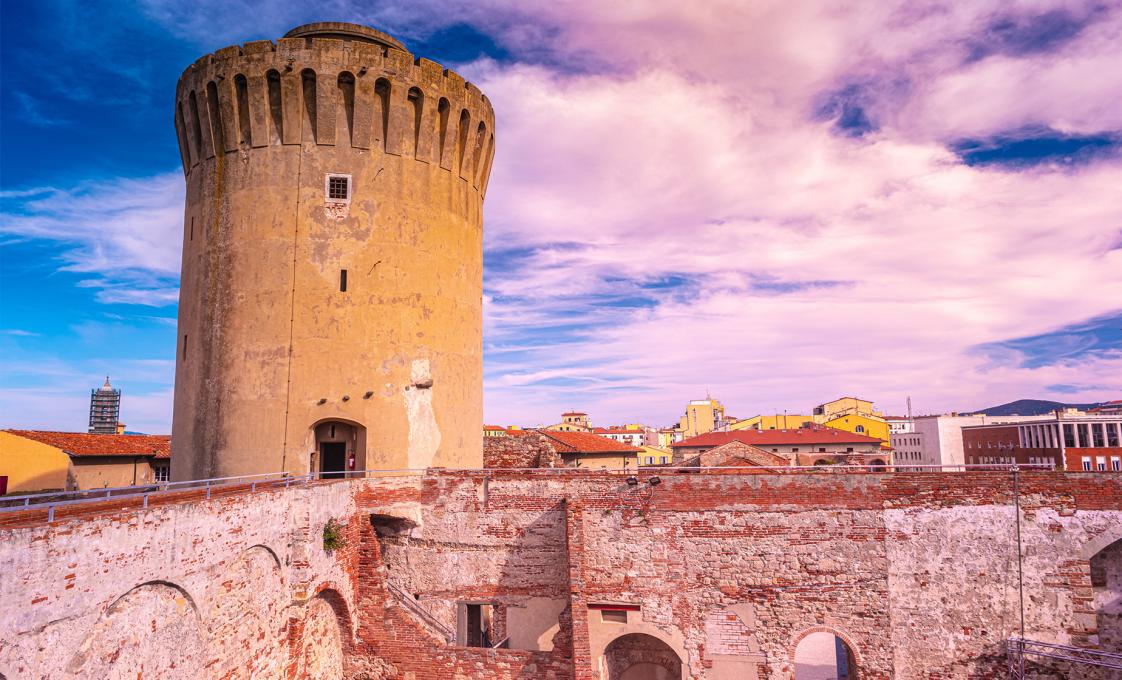 Take a quick look into the everyday life of this charming seaside town.

Explore the Best of Livorno

Your local tour guide will meet you at the pier, and after taking the local shuttle you will reach the center of Livorno, Italy. On this Livorno excursion, you will visit the Fortezza Vecchia, which dominates the old Mediceo port. The fort is both a historical symbol of Livorno and an important cultural hub where many concerts, exhibitions and events are held throughout the year. During this Livorno excursion, you can climb right up to the top of the Matilde tower, the oldest part of the fortress, from where there are great views over the port on one side and the town on the other. When the Medici rulers of Florence became interested in making Livorno their port, they commissioned Antonio and Giuliano Sangallo to redesign the nucleus of the original fortress, which was completed in 1534.

You will then proceed to the quarter of the town called "New Venice," for the labyrinth of tiny streets and canals crossed by bridges and flanked by quays. In the 17th and 18th centuries, merchants were doing business in this quarter. Merchandise was transported by boat through the canals of the town. The name is due to the fact that the quarter was built as an imitation of the city of Venice in northern Italy. Skilled workmen from Venice were called to construct this quarter, which soon became the symbol of Livorno's wealth in the 19th century. Merchants, foreign diplomats and members of the upper middle class moved to this area, building aristocratic palaces for their homes.

After the visit of the New Venice quarter, you will continue towards the center of the town, where you will visit Livorno's Central Market, which is one of the highlights on any visit to the city. The huge building towers over the main canal on the Scali Saffi, and is easily reached from Piazza Cavour. It dates from the late 19th century and was designed by Angiolo Badaloni, who was probably inspired by Parisian architecture of the same period. The market is open every morning from Monday to Saturday, and is well worth a visit. Five entrances lead into the main food hall, where 34 shops and 230 stalls sell meat, eggs, poultry, ham, cheese, bread, wine, and a wide variety of intriguing foodstuffs. There are two adjoining smaller halls, one dedicated to fresh fish and the other to fruits and vegetables. The aroma of freshly ground coffee is often the first to reach you from one of the coffee stalls.

During your free time, you may want to visit one of the bars inside the market for an Italian coffee and pastry, shop for picnic supplies, or just wander around absorbing the lively atmosphere and gazing at the enormous range of produce on sale. Alongside the market building, on Via Buontalenti, is the central clothes market; adjoining that, in Piazza Cavallotti, is the outdoor fruit and vegetable market.

At the end of this Livorno cruise tour, you may remain in town. Your guide can give you suggestions for sightseeing, shopping and dining. Transportation back to the pier will be at your own expense. Those wishing to return to the cruise ship pier at the end of the tour will be walked to the shuttle stop. Please Note: Vehicles available for this tour accommodate groups of up to 2, 6, 8, 19, 25, or 30 guests maximum. Please take this information into consideration when booking

We are experts in providing exceptional shore excursions. We understand that in today's fast paced world, vacations have become an increasingly important way to relax, reconnect with family and friends, and experience new and interesting places. With this in mind, we provide the highest quality tours by performing extensive research, and detailed reviews. While other companies also offer excursions, we strongly believe our expertise and approach set us apart. The large cruise lines sell shore excursions - typically in very large groups visiting high traffic sites. We focus on smaller groups visiting more interesting and authentic locations using more personalized local operators. While the cruise lines are experts in delivering cruises, we are experts in delivering shore excursions.

Our Approach
We believe quality service is not only highly valued by customers, but ultimately leads to better experiences and higher satisfaction. Unlike the cruise lines and other tour companies that rely almost entirely on websites, we encourage customers to call us. We want to invest our time answering your questions, providing input, and selecting the excursions that best meet your needs.

Our Tours
Our goal is to provide customers a wide array of exciting, appealing, and enriching tours. For those customers who prefer to travel in smaller groups with more personalized service, we offer a wide variety of small group tours around the world. These tours generally range in size from 2-12 people compared to larger tours which can number up to 50 people. While exploring the destinations and ports on this website, feel free to search for these "Small Group Tours". For those customers interested in private tours, we offer many outstanding excursions that allow you to travel with your party alone and, in many cases, to fully customize your tour. Search for "Private Tours" if you are interested in this experience. Our "Scenic" tours provide up close and personal access to some of the most spectacular natural environments on Earth from majestic glaciers in Alaska to spectacular reefs in the Caribbean. Our "Cultural" tours allow customers to experience local customs, entertainment and culinary delights ranging from tribal dances in Alaska to an outstanding local meal in Santorini, Greece. Our "Active" tours offer a multitude of exciting and adventurous ways to experience our destinations. Our customers can kayak the turquoise waters of the Caribbean, hike to a spectacular waterfall in Hawaii, or bicycle through quaint villages in France. Our "City" tours allow travelers to see the highlights of great cities around the world with unique insights provided by our expert tour guides.

Our People
In our experience, exceptional travel experiences are almost always delivered by exceptional people. With that in mind, we utilize a comprehensive approach to select and employ the leading tour guides and tour providers around the globe. We hold our people to very high standards which we measure by our comprehensive Quality Control process and, most importantly, by our customer feedback, which we will actively seek from each of our customers.

Our Owners
Shore Excursions Group is owned by seasoned travel executives possessing extensive experience across many sectors within the travel industry.

Michael Bonner
Mr. Bonner has over a decade of experience working in the cruise industry in a variety of roles for both Royal Caribbean Cruises Ltd. and Viking River Cruises. Most recently, Mr. Bonner was the Chief Operating Officer for The Scholar Ship, a Royal Caribbean program aimed at providing college students onboard educational programs in conjunction with enriching shore excursions around the world. Mr. Bonner also helped co-manage Viking River Cruises U.S. Operations, and he ran the corporate, strategic, and deployment planning functions at Royal Caribbean. While at Royal Caribbean, Mr. Bonner was responsible for forming Royal Celebrity Tours, Royal Caribbean's land-based tour operation in Alaska, which takes cruise passengers on multiple day tours through the interior of Alaska either before or after their cruises. Prior to working at Royal Caribbean, Mr. Bonner was a consultant for Booz Allen & Hamilton.
Less
from $25.00 (USD)
Per Person
Contact Us
Tour Type
Private
Group Size
Private
Activity Type(s)
Historic, Scenic, Active
Tour Duration
3 Hours
Activity Level
Moderate
Tour Leaves From
The Ship Pier.
Food/Beverage Provided
Not Included
Special Instructions
Comfortable clothing and sensible walking shoes are recommended. Sunscreeb and sunglasses are suggested.
Restrictions
The majority of this program involves walking over paved surfaces and some cobblestone. Steps are required to reach the top of the fort.
Terms & Disclaimers