Private Splendors Of The Amalfi Coast 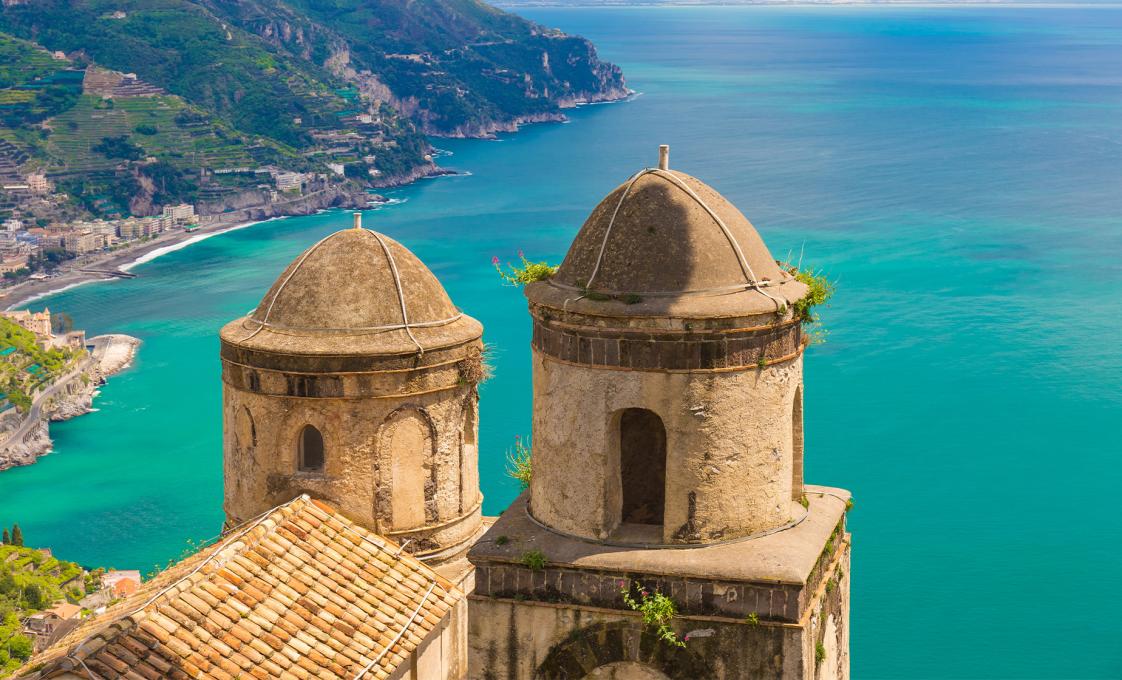 For the scenery lover who can not get enough of the Amalfi Coast, this tour is for you.

Private Splendors of the Amalfi Coast

After meeting your professionally-trained guide, on the tender pier in Sorrento, if you are in a group of 7 or less, you will board your transportation and drive up the narrow road from the pier up to the town of Sorrento, perched on the cliffs above. Groups of 8 or more will board a minibus to reach your larger vehicle parked above in Sorrento. From here, you will drive through Sorrento, and then start climbing through the olive and lemon groves en route to the Amalfi Coast. Admire the dolomite cliffs, towering straight up out of the sea and typical villages, which have characterized Sorrento's peninsula for many centuries. Pause for a photo opportunity at a vantage point to admire the fascinating coast. Drive along the steep winding coastal road passing Positano, a pretty fishing village, which has become something of a colony of artists and writers.

The picturesque seaside resort of Amalfi lies at the mouth of a deep gorge. It is one of the most popular holiday resorts in Italy. As a sea power, Amalfi played an important role in the Middle Ages. Amalfi was part of the four Maritime Republics that included Venice, Genoa and Pisa. After lunch at a local restaurant, you will have free time on your own to take photos and stroll along the narrow streets to the Piazza del Duomo. From this square, a flight of 60 + steps leads to the impressive Cathedral of St. Andrew. The interior of the church dates as far back as the 13th century with the highlight of the cathedral being the 11th century bronze doors from Constantinople.

You will then travel further south to another jewel in the Amalfi crown, Ravello. The town has been a destination for artists, musicians, and writers, including the likes of Grieg, Boccaccio, Woolf, Miro, Bernstein and others. Every summer, a music festival takes place in honor of Richard Wagner, who suggested that it was in Ravello that he found the inspiration for his Parsifal.

Adjacent to the Duomo, is the Villa Rufolo, that dates back to 1200AD. During your visit to the villa, you will feel the thousand years of Arab cultural influence. The main building, which contains a chapel and a reception hall, is built on three levels which in the past hosted high ranking persons among whom Pope Adrian IV and King Robert of Anjou. Perhaps the most favorite part of the villa is the famous garden that overhangs the sea. It is on this terrace where the Ravello Festival is held.

On your return to Sorrento, those guests wishing to end their tour above in the town of Sorrento may do so. They will then be responsible for getting down to the tender pier via either a taxi or walking.

We are experts in providing exceptional shore excursions. We understand that in today's fast paced world, vacations have become an increasingly important way to relax, reconnect with family and friends, and experience new and interesting places. With this in mind, we provide the highest quality tours by performing extensive research, and detailed reviews. While other companies also offer excursions, we strongly believe our expertise and approach set us apart. The large cruise lines sell shore excursions - typically in very large groups visiting high traffic sites. We focus on smaller groups visiting more interesting and authentic locations using more personalized local operators. While the cruise lines are experts in delivering cruises, we are experts in delivering shore excursions.

Our Approach
We believe quality service is not only highly valued by customers, but ultimately leads to better experiences and higher satisfaction. Unlike the cruise lines and other tour companies that rely almost entirely on websites, we encourage customers to call us. We want to invest our time answering your questions, providing input, and selecting the excursions that best meet your needs.

Our Tours
Our goal is to provide customers a wide array of exciting, appealing, and enriching tours. For those customers who prefer to travel in smaller groups with more personalized service, we offer a wide variety of small group tours around the world. These tours generally range in size from 2-12 people compared to larger tours which can number up to 50 people. While exploring the destinations and ports on this website, feel free to search for these "Small Group Tours". For those customers interested in private tours, we offer many outstanding excursions that allow you to travel with your party alone and, in many cases, to fully customize your tour. Search for "Private Tours" if you are interested in this experience. Our "Scenic" tours provide up close and personal access to some of the most spectacular natural environments on Earth from majestic glaciers in Alaska to spectacular reefs in the Caribbean. Our "Cultural" tours allow customers to experience local customs, entertainment and culinary delights ranging from tribal dances in Alaska to an outstanding local meal in Santorini, Greece. Our "Active" tours offer a multitude of exciting and adventurous ways to experience our destinations. Our customers can kayak the turquoise waters of the Caribbean, hike to a spectacular waterfall in Hawaii, or bicycle through quaint villages in France. Our "City" tours allow travelers to see the highlights of great cities around the world with unique insights provided by our expert tour guides.

Our People
In our experience, exceptional travel experiences are almost always delivered by exceptional people. With that in mind, we utilize a comprehensive approach to select and employ the leading tour guides and tour providers around the globe. We hold our people to very high standards which we measure by our comprehensive Quality Control process and, most importantly, by our customer feedback, which we will actively seek from each of our customers.

Our Owners
Shore Excursions Group is owned by seasoned travel executives possessing extensive experience across many sectors within the travel industry.

Michael Bonner
Mr. Bonner has over a decade of experience working in the cruise industry in a variety of roles for both Royal Caribbean Cruises Ltd. and Viking River Cruises. Most recently, Mr. Bonner was the Chief Operating Officer for The Scholar Ship, a Royal Caribbean program aimed at providing college students onboard educational programs in conjunction with enriching shore excursions around the world. Mr. Bonner also helped co-manage Viking River Cruises U.S. Operations, and he ran the corporate, strategic, and deployment planning functions at Royal Caribbean. While at Royal Caribbean, Mr. Bonner was responsible for forming Royal Celebrity Tours, Royal Caribbean's land-based tour operation in Alaska, which takes cruise passengers on multiple day tours through the interior of Alaska either before or after their cruises. Prior to working at Royal Caribbean, Mr. Bonner was a consultant for Booz Allen & Hamilton.
Less
from $135.00 (USD)
Per Person
Contact Us
Tour Type
Private
Group Size
Private
Activity Type(s)
Scenic, Historic, Cultural
Tour Duration
8 Hours
Activity Level
Moderate
Tour Leaves From
Cruise Ship Tender Pier
Food/Beverage Provided
Lunch
Special Instructions
We recommend wearing comfortable clothing and sensible, closed toe walking shoes. Sunscreen and sun glasses are suggested.
Restrictions
Guests must be able to walk over cobblestones and uneven surfaces, inclines and steps. Guests should be in good physical condition with the ability to walk uphill or climb stairs. The tour itinerary may be reversed but always covering the mentioned sights. Heavy traffic congestion should be anticipated and may affect the duration of the excursion.
Terms & Disclaimers